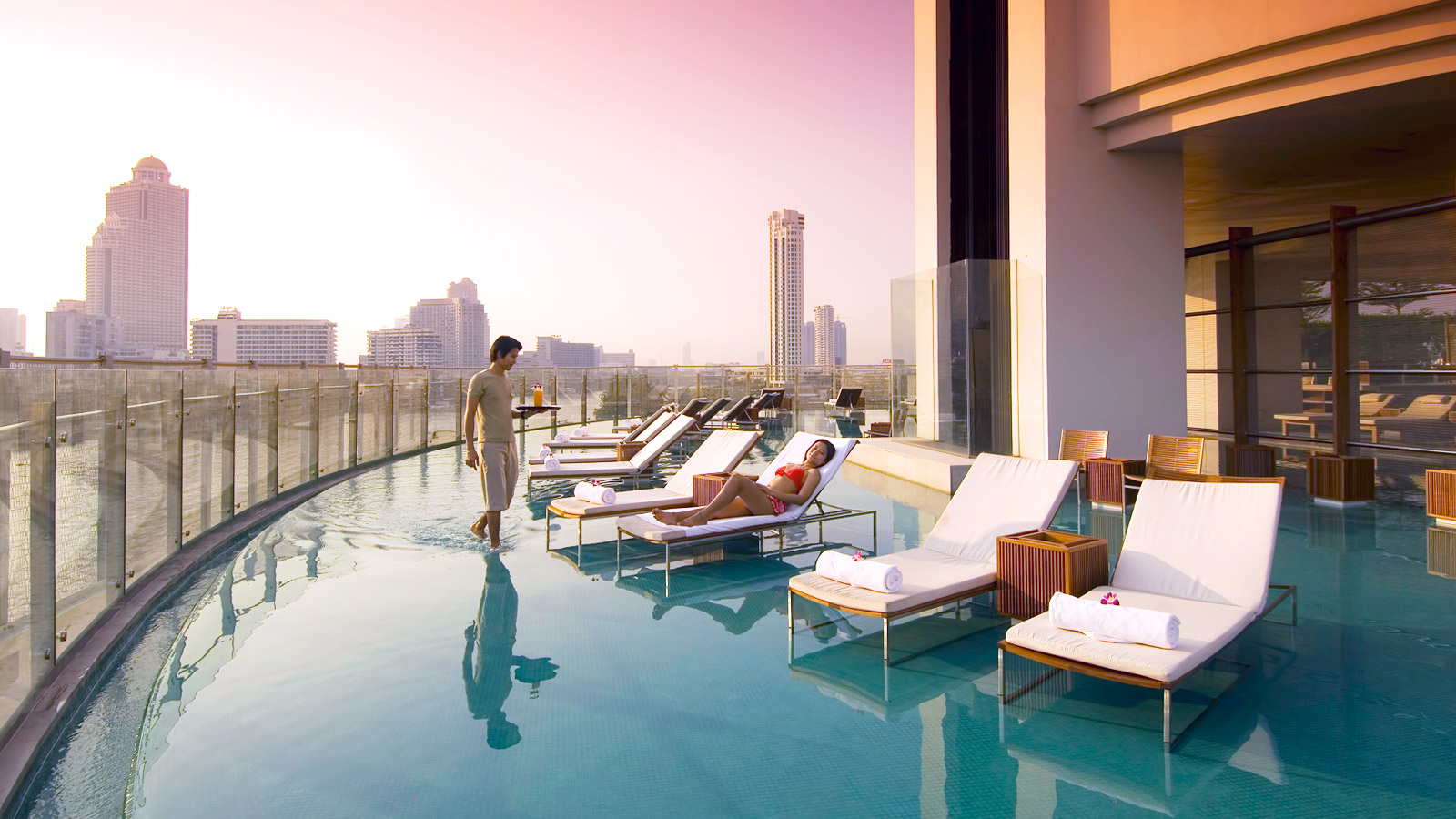 I have heard a lot about the birthplace of Mozart and expected the streets of Salzburg to swing to the tunes of “the greatest composer of all time”, who was later to be marketed in chocolate. But the combination of the Baroque and medieval flair of Salzburg’s old town beneath its hills offering a perfect view of the city made me even more eager to meet my guide and discover the gems of this gateway to numerous ski resorts in Alps.

The guide told me that the Celts were the first settlers of Salzburg and that in their language “salz” means life. Salt was once the main product for trade, especially in medieval times, and Salzburg was centrally located on the salt route from Bavaria to Venice.

Salzburg was later recognised as the Catholic centre of northern Europe. The archbishops sought political neutrality to develop the city as a strong cultural and educational centre while other neighbours were in war.

The face of contemporary Salzburg – the Baroque majesty of the old town – was created in the 17th and 18th centuries. It was then that the prince-archbishops Wolf Dietrich, Markus Sittikus and Paris Lodron carried out their major building plans. It was not until 1816 that the province of Salzburg was a part of the Hapsburg Empire, when all of the boulevards, riverbank walks and streets I saw with the guide before we entered the old town were built.

The Mirabell Gardens were commissioned by Archbishop Wolf Dietrich to the famous architect Fischer von Erlach and are truly lovely. He designed the Baroque Mirabell Palace and its green exterior embellished with mythological motifs. One could see that the archbishop wanted a residence with views of the castle and domes in the old town, which were our next stop before sunset.

To see Salzburg spread out before us we took the funicular up to Hohensalzburg Fortress – a boat full of sightseers was paddled up and down the river. The top terrace revealed a view of the city set between Kapuzinerberg and Mönchsberg hills. We walked through a park leading to the Mönchsberg to enjoy another panorama view from the terrace of the stone-cube building of the Museum of Modern Art.

On our way back to the old town we stopped at a beer garden under chestnut trees in the courtyard of a former monastery. I was sure that all beer fans would be happy here as I watched people ordering litre mugs of beer with pretzels and white radishes.

Wandering through cobble streets, we returned to the old town and walked along the former triumphal road. In the times of archbishops, it was the official way to approach the noble cathedral, an architectural Baroque jewel dedicated to St Rupert and St Virgil.

The archbishop’s horses were washed in a water dip, which we found in front of the Sigmund Tunnel built through the Mönchsberg. I found its painted walls and a fountain with a statue of a horse (Italianate replica) very attractive. Nearby there is a concert hall built into the rock of the Mönchsberg and barely visible from outside. The Great Festival Hall hosts operas and festive concerts. Next door the Rock Riding School, which was built over 300 years ago to train the archbishop’s cavalry, attracts visitors to open-air concerts, opera and theatrical performances.

Having passed the horse dip we easily reached the cathedral through the archbishop’s residence on Residenz Square with its dominant fountain. It is reminiscent of the fabulous style of squares and public places in Rome, and indeed Archbishop Dietrich was a member of the Medici family near Milan. He was actively involved in the design of the public places and the Residenz Palace in Salzburg.

The narrow streets of Salzburg’s old town played an important role in public life because the guilds were located here. They are replaced today by fine shopping addresses in the city and a variety of food venues. To relish the atmosphere of old times we undertook a coffee-house tour and ended up at Tomaselli, the oldest café in Austria where Mozart once sipped his favourite white coffee. The Americans turned the coffee shop into a doughnut snack bar at the end of the Second World War, but it regained its former glory and was visited by such famous persons as King Edward VIII, Marlene Dietrich and Louis Armstrong.

One will certainly wish to see the Konditorei (patisserie) of Paul Fürst, the creator of the famous confection known as Mozartkugeln, which are balls of chocolate. At the Paris World Exhibition in 1905, he was awarded a gold medal for this best-selling chocolate and marzipan creation, to make Salzburg and its most famous son popular worldwide.

A cup of coffee and a Mozartkugel are a welcome break after several days of skiing. A trip to the capital of the province of Salzburg will make your winter stay more diverse than you may imagine.

Gastein Ambiance, Alpine Spas and Healing Powers
Despite chilly weather we drove from Salzburg and entered the idyllic mountain world – steep slopes overlooking meadows dotted with cows and houses in small communities. We reached Bad Hofgastein after an 80km drive and took one of the first cable cars up the to the peak of the Schlossalm.

Within the 20-minute ride up the mountain we emerged into sunshine through mist and cloud on the upper level to enjoy the lovely sight of alpine-meadow huts and hiking trails.

From there we looked over the Anger Valley ski centre, the Sport Gastein area and the Graukogel peak behind which a glacier reflected the sun’s rays. A mountain hiker, whom we met at the upper lift station, told us that the ice massif is in a natural park and could be reached with an experienced guide.

When descending to Gastein we visited one of the famous local spas that contribute much to the resort’s fame. The healing powers of the thermal waters of Alpen Therme Gastein had been already known to Emperor Trajan. The ultramodern wellness spa in Bad Hofgstein today is adapted to the tastes of the young crowds who love the après ski in its top-terrace bar or relaxing in a dome of screens, where projections of films or musical clips are shown.

If you spend half a day on the blue or black runs, I would advise you to then visit also the spa in the rocks (Felsentherme) in Bad Gastein, where we stopped to take pictures of the white-capped mountains seen from the swimming pool. The spa’s architecture is of the alpine-hut style. The nudist area is on the top floor of the leisure centre.

From the spa we proceeded into the heart of the Radhausberg mountain for an unusual experience in the radon tunnel in a former gold mine. At the start of the Second World War, attempts were made to revive the search for gold in the mountain because this part of Austria had been a rich source of metal ores since Roman times. Mining reached its peak in the 16th and 17th centuries and then gradually declined. Miners hired to search for gold found none, but their rheumatic, asthma and joint ailments, and even skin conditions had considerably improved.

They were the first to be healed in the tunnel. Continuous research has been undertaken in the tunnel for almost 60 years and about 2.5 million people have visited the Gasteiner Heilstollen. A small train takes abound 120 people each day down a 4.5km tunnel inside the mountain, where in the four stations the temperature ranges from 37C° and 70% humidity in the first one, to 41.5C° and almost 100% humidity in the fourth station. People move from one station to the next at the advice of their doctor. Those who had already experienced the 1.5-hour treatment assured me that the high temperature and humidity and naturally high radon content have vital effects on one’s body. There are also short sample visits for first-time visitors, which take place every Tuesday and Thursday in winter.

After we left the tunnel, an elderly man suddenly run out of the forest and crossed the road in front our car – “as vital as if he has just left the healing tunnel” – my colleagues said with a laugh. Would you not be interested in a sample visit to charge yourself with energy for the next day of skiing?